Cammile Adams Perseveres To Prevail In 200 Butterfly In Omaha

0
You are reading: Cammile Adams Perseveres To Prevail In 200 Butterfly In Omaha
Events & Competitions ,Uncategorized @en_us

As a little girl, Cammile Adams chose to contest the 200 butterfly for a simple reason: With few competitors in the event, it was her best chance to win a ribbon. Years later, Adams is a two-time Olympian in the event, following her victory on Thursday night in 2:06.80, the eighth-fastest time in the world this year.

Adams’ triumph capped two drama-filled days for the ARENA athlete, who trains under David Marsh with SwimMac Carolina. During the preliminaries of the 200 fly, Adams was initially disqualified for what an official deemed an illegal turn. However, video footage revealed Adams did nothing wrong, and she was reinstated.

A night after that hectic ordeal, Adams demonstrated a calm and steady nerves while negotiating the final. Seventh after the first lap, Adams moved up to third place on the second lap, and then turned to her trademark closing speed over the last half of the race. The result was a comfortable triumph over runnerup Hali Flickinger, who touched the wall in 2:07.50.

“It’s been crazy,” Adams said. “I would have liked to have been a little faster, but I’me very happy to punch my ticket to Rio. It’s so much more than just swimming. I’ve learned about myself and how to overcome obstacles, and obviously yesterday was an obstacle that I never thought I would be able to overcome, but it was. I’m really glad that I have the support staff that I do behind me. They helped to put me on a path and continue to support me. Like I said yesterday, I really sucked it up. It has been the defining factor for me these past two days.”

With Adams’ win and Tom Shields’ second-place finish, ARENA has placed a pair of 200 butterflyers on the Team USA roster. Meanwhile, Connor Jaeger makes it three ARENA qualifiers for the Olympics, thanks to his victory in the 400 freestyle.

Dive and turn: 2 exercises to improve your push-off 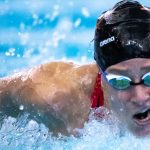 NEVER WANT TO MISS A THING ABOUT SWIMMING AND WATER SPORTS?

JOIN US AND CATCH UP WITH OUR WEEKLY ROUNDUP!

Sign up for the newsletter. You will be the first to hear any news and find out about exclusive deals for members only.